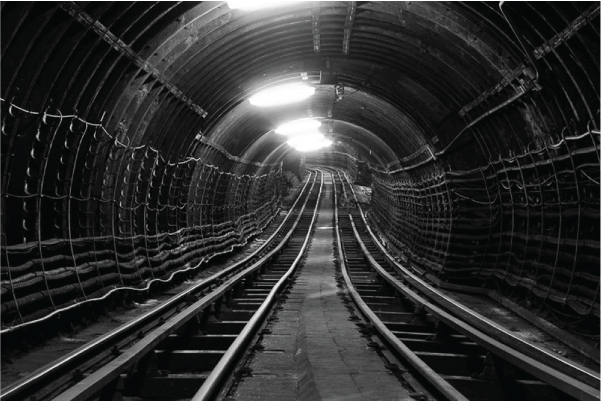 London’s Post Office Railway – colloquially known as the mail rail – is buried 70 feet under the city and stretches over six miles, from Paddington in the north-west to Whitechapel in the east. For over 75 years, tiny driverless trains called mini-yorks cruised at a breezy 40mph down its narrow gauge rails to transport 4m parcels a day across the capital. In 2003, the Post Office mothballed it, and it didn’t take long for the railway to recede in urban memory, a buried presence haunting the junction of history and myth.

From 2008 to 2013, I was deeply embroiled in research with a group of urban explorers in London. The infamous London Consolidation Crew (LCC) climbed the Shard before it was complete, took photos of every abandoned tube station in the city and traced all of London’s lost rivers. But throughout years of searching, the mail rail continued to elude us.

Finally, in the summer of 2011, good research and persistence finally paid off – an entry point was located. For four days, explorers walked every inch of track and photographed every train and junction in the system. Releasing the photos and stories of the mail rail exploration was a remarkable moment; as millions of hits crashed our blogs, I imagined citizens of the capital falling asleep that night dreaming of London’s hidden secret underworld.

Interest in ruins seems to have snowballed over the past decade. People have become fascinated by the lived histories that ruins harbour, by the unique sensory and aesthetic qualities of abandoned spaces and – I think more than anything – by the memento mori they perform. Being in a ruin, surrounded by a bewildering amalgam of decay and rebirth, reminds us that we too will die and that future things will be born of us. In other words, ruins put us in our place.

One of my research participants, Statler, explained to me what it felt like to walk through the mail rail: “It was hot, sweaty, dank, wet … It smelt like a mouldering hospital in parts and was pretty cramped in the tunnels…. There were also a lot of calcium stalactites that would snap off in your face and hair it was obvious that people hadn’t been in the tunnels for a very long time.”

Imagine the feeling of walking through a great feat of human engineering like the mail rail: a secret, forbidden zone – a ruin-in-progress. Imagine the silence of the place, the feeling that you are surrounded by unresolved history. Imagine nature sluggishly swallowing the tunnels, where you can see calcification will eventually connect the top of the tunnel to the tracks.

Imagine sitting in a mini-york, even starting it up and nudging it forward a bit down the creaking rails under Clerkenwell, where thousands of people are stumbling past at street level on their way home from a night out, totally unaware that this implausible adventure is unravelling 70 feet below them. Imagine climbing out of the hole in the ground at dawn with a memory card full of images that the world had not been seen for years. That is why the LCC pursued the mail rail for so long: because it was the perfect ruin.

Soon you will be able to see the mail rail for yourself; the Post Office has announced that they will be opening it to visitors in 2017. I am delighted that the public will finally be able to see the system, and the new Postal Museum that’s been proposed will be a welcome addition to London’s formidable heritage landscape. However, for your £9 (£14.50 if you want to ride the train), you will only see a small part of the system, and you would be hard pressed to call it an adventure.

And of course, it will no longer be a secret or a ruin – the two most alluring aspects of the place will have been exorcised. They have announced that two new mini-yorks will be built for the “ride”, prompting me to wonder whether what we visit in 2017 will be the mail rail at all – or rather a Disneyfied profit-driven imitation for tourists.

It is likely that the actions of urban explorers played a role in the decision to create the museum; whether it was by sparking the public’s imagination, or in prompting the Post Office to take action, once they realised what an appetite there was for stories of the urban underground. I just hope they don’t do the legendary system a disservice as a result.

For those heritage enthusiasts who prefer a more visceral connection to the past, rumour has it that a pneumatic underground railway was used by the Post Office in London between 1863 and 1874 – a precursor to the mail rail. There’s also an identical, and even older, mail rail in Chicago awaiting rediscovery. Even as parts of our urban heritage are opened to the public, mysteries like these will keep driving explorers deeper into the urban underground.

This article was originally published on The Conversation.