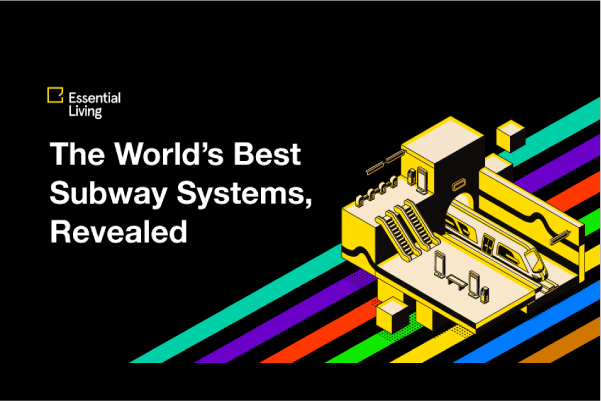 How many of these subway systems have you travelled on? We’ve revealed which of the busiest metro systems around the world are the best, according to passenger experience.

There’s a lot to be said for the subway. No road rage, no traffic and no sat nav to worry about. But which subway tops the list as the best for travellers?

Whether you travelled as a commuter or a tourist, it’s likely that you’ll have travelled on at least one of these subway systems. From the London Underground to the Shanghai Metro, we have ranked 10 of the busiest subway systems based on what travellers find the most important.

We used a weighted ranking system to assign a score to each subway/metro system. This took into account the the eight factors described below. Each of these factors was weighted and assigned a value with higher numbers equalling a better experience for passengers.

Out of a possible score of 100, the weighting takes 8 factors into account to reveal the world’s best subway systems:

From pet friendly carriages, to step-free access, there are so many factors that make a metro journey comfortable. But you might be surprised at the subway systems topping the list for each of our categories.

Our number one metro overall? The Seoul Subway in South Korea topped the list. The overall ranking takes into account every element of our study – so that includes the number of stations with step-free access, the price of a ticket and the age of the system (amongst many others).

The rest of the top five come from all over the globe: Shanghai Metro in China, Tokyo Metro in Japan, Mexico City Metro and the London Underground.

The lowest scoring were the Paris Metro, Beijing Subway and the Moscow Metro.

Putting aside the other elements, which subway system carries the most passengers every year?

The subway systems in Beijing topped the list, carrying over 38bn each year! But, if you’re looking for a more comfortable journey, then the Madrid Metro carries just over 657m each year – that’s 5000% fewer passengers the Beijing system, which could explain why Madrid Transit are campaigning for more Madrileños to use the system each year.

THE SUBWAYS RANKED BY ACCESSIBILITY

These days, we’d expect all major cities to have an accessible transit system, but unfortunately our study reveals some of the biggest and busiest subways still have some work to do to make their systems accessible.

Seoul comes out on top, followed by Madrid and Shanghai. Closer to home the London Underground comes 5th and Paris takes the last spot.

Accessibility was assessed with a points-based system. Each subway was given points for the number of stations with step-free access, lifts and escalators.

Only two subway systems in the study have step-free access in 100% of the stations, that’s Shanghai and Seoul doing the most to make their transit systems accessible to everyone.

Surprisingly, the New York Subway appeared towards the bottom of the list with step-free access in just a quarter of all stations, revealing that some of the busiest transit systems still have some work to do to make their systems accessible to all.

THE WORLD’S MOST PET-FRIENDLY SUBWAY

Seven of the 10 subways featured in the study welcome pets on board, with varying rules and regulations.

London scored top marks for it’s pet-friendly credentials, allowing dogs to travel for free as long as they are on a lead as well as smaller animals in suitable carriers. In fact, out of all of the metro systems in the study, London was found to be the most comfortable for both humans and animals.

Here are how the rest of the systems stacked up:

THE MOST CONVENIENT SUBWAY SYSTEM

There’s nothing worse than arriving at the metro station to find you’ve missed the last train home, so the subways systems were scored based on their round-the-clock service.

VALUE FOR MONEY ON THE WORLD’S SUBWAY SYSTEMS

Whether you are an annual season ticket holder, or prefer to buy your tickets on-the-fly, each subway system has been scored based on the cost of a single ride, a monthly ticket and if you can pay using contactless methods.

It’s the Mexico City Metro that tops the list as offering the best value for money; a single ride costs just 5 pesos (that’s £0.20) and a monthly ticket costs just £5.00. The most expensive are the London Underground, the New York Subway and the Beijing Subway.

ARE YOU SITTING COMFORTABLY?

Each subway system was scored on the level of comfort on offer to passengers, which included ventilation and public bathrooms.

London topped the list, offering the most toilets per passenger and ventilation systems at most stations.

Newer doesn’t automatically mean a better experience for passengers, especially when it comes to the world’s busiest subways. We scored each system focusing on their basic infrastructure. This included the age of the system, kilometers of track and average speed, amongst others.

Data correct as of 27th January 2020, combining information from a range of reputable sources such as official metro/subway websites in each location and Wikipedia.

We used a weighted ranking system to assign a score to each subway/metro system. This took into account the the eight factors described below. Each of these factors was weighted and assigned a numerical value with higher numbers equalling a better passenger experience.

The 10 subway and metro systems included in the study had the largest passenger footfall and usage annually.

This article was originally published on Essential Living.