The Hovercraft Museum Is A Miracle Of Floating Metal Machines, And We’re Big Fans 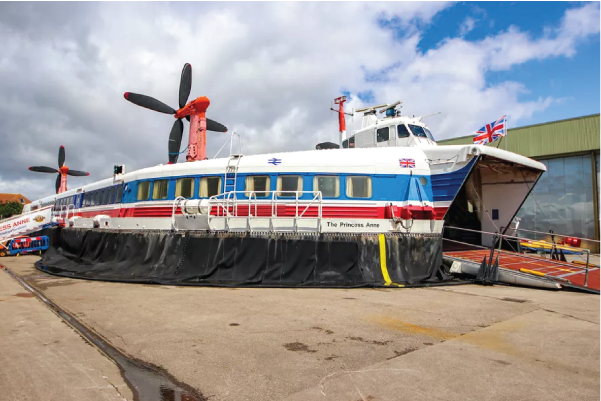 From the largest commercial hovercraft to military and civilian models, this museum has an incredible collection of rare vehicles. Here’s a look inside.

There’s something otherworldly about hovercraft. The way they glide over water and land, usually with billows of spray or sand, is pure mechanized spectacle. There was a time when it seemed hovercraft were the future. Huge car-carrying ferries shot over the English Channel, tying Britain to the Continent with speed and ease, decades before the Channel Tunnel was dug.

But with the opening of the Chunnel in 1994, the age of the hovercraft waned. The behemoths lost their luster and were mostly retired, while the companies that made them largely disappeared. Only a handful of smaller hovercraft survive in public service today, and a few more more serve in militaries and governments. Gone are the huge hovering ships that once sped across the sea.

Well, not completely gone. One remains. The Princess Anne, the last of the Mountbatten class of hovercraft, the largest ever made. It’s being restored, along with dozens of relics of this almost-forgotten era of transport, at England’s Hovercraft Museum.

On a cushion of air

The Museum bills itself as “the world’s largest collection of hovercraft,” but I didn’t know exactly what to expect. It’s only open one day a week, and I’d read about how a lack of funding had meant the Princess Anne’s sister ship, the Princess Margaret, had been scrapped a few years earlier.

The gray clouds of an English coastal summer hung low as my friends and I entered the museum, but soon the skies cleared. In the sun the Princess Anne is an incredible sight. Hovercraft, even not running, don’t look like any other craft. They don’t have the shape of a boat, and yet are too big to be an airplane.

We joined a free tour run by one of the museum’s extremely knowledgeable docents. The restoration shop was first, revealing dozens of craft in various states of repair.

Then it was over to the British Hovercraft Corporation BH.7. The military of several countries still operate hovercraft. They might not have the speed and range of other vehicles, but their amphibious nature more than makes up for it. The BH.7 was one of the earliest designed for military use. It never saw service in the UK, but several were sold to Iran in the ’70s. It’s the first large (well, medium-sized) hovercraft I’ve been inside. A fascinating hybrid of ship and aircraft, hovercraft have cabins and hatches, like a ship, but reduced materials and thinner bulkheads certainly feel more like an aircraft. I imagine the big airships had similar designs.

Then it was time to see the Princess Anne. At over 185 feet (56 meters) long, she’s the size of many boat ferries. This hovering craft could carry up to 60 cars and 400 people at over 70 mph. Four 21-foot propellers on pivotable pylons controlled speed and direction. She was able to get from Dover, England to Boulogne, France in as little as 22 minutes.

The Channel Tunnel opened in 1994, connecting London to Paris in under 3 hours. Train carriages could carry cars, offering an even faster option than the ferry. According to the museum, though, this isn’t what killed the Channel hovercraft service. It was the end of duty-free shopping. So no more cheap French wine on a “booze cruise,” which was a common and profitable trip for the hovercraft service. This, along with the loss in revenue to the high-speed trains, sealed the fate of the big hovercraft.

There are a few hovercraft services still running. There are also several types of military hovercraft used around the world. I even saw a Navy PACV, based on the SR.N5 you’ll see in the gallery above, awaiting restoration at the Yank’s Air Museum Boneyard. In fact, researching that vehicle was the beginning of the internet rabbit hole that led me to visit this very museum.

Like most vehicle museums, the Hovercraft Museum has a lack of funding. It’s already lost the Princess Margaret because it couldn’t afford to keep it. In a few years it might lose the Anne too. That’d be a shame, since it’s a unique museum offering a unique experience. So if you’ve got a free few hours on a Saturday, and you’re in the area, I recommend a visit. For everyone else, check out the photos in the gallery above of these amazing hovering machines.

This article was originally published on CNet.

PrevPreviousReopening London’s Mail Rail: Why It’s So Hard To Recreate The Thrill Of Exploring Urban Ruins
Next18 Exhibitions To See This Summer In London And BeyondNext
Facebook
Twitter
LinkedIn
Menu