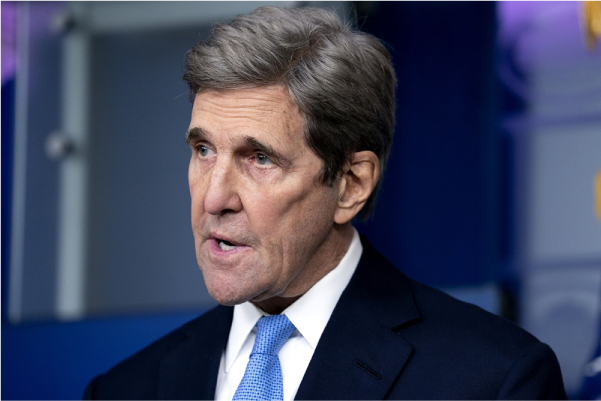 John Kerry wants to accelerate the decarbonization of the global shipping industry, which spews more carbon dioxide into the atmosphere each year than France and the U.K. combined.

The U.S. climate envoy said back in April that he wants international shipping’s emissions to drop to zero by 2050, a much sharper cut than the industry’s current target. The U.S. will work with other countries at the International Maritime Organization, which regulates global shipping, to “adopt ambitious measures that’ll place the entire sector on a pathway to achieve this goal,” he said.

Starting June 10, those aims will face their first major test as countries gather virtually for the latest round of IMO talks on cutting CO2 emissions. Major proposals, including a carbon tax, are on the table. And while little of significance is likely to be decided at this meeting, the new U.S. position is expected by industry insiders to give fresh impetus to the discussions.

“Game changer is a strong word, but it’s probably true in this context,” Soren Skou, CEO of A.P. Moeller-Maersk A/S, the world’s largest container line, said of the new U.S. stance. It suggests there’s a “better chance” of getting to zero emissions by 2050, he said.

Shipping’s current 2050 target is only a 50% reduction in annual greenhouse gas emissions versus 2008, whereas limiting global warming to 1.5 degrees Celsius requires net-zero CO2 by around the same time. So far, there’s no concrete plan to achieve even this lower level of ambition, although the industry overwhelmingly supports putting a price on carbon to force behavioral change and enable clean alternatives to compete with today’s fossil-based marine fuels.

To that end, Maersk has called for a CO2 tax on marine fuels of at least $150 per ton, which would almost double the cost of very low-sulfur fuel oil, a popular ship propellant, using today’s prices. Commodities trading giant Trafigura has pitched even higher at $250-$300 per ton.

On the agenda for the upcoming talks, officially called MEPC 76, is a very small CO2-based charge — backed by the shipping industry and multiple countries — to raise $5 billion for research into clean alternatives. There’s also a call for a $100-a-ton carbon dioxide tax by 2025, ratcheting up every five years, from the Marshall Islands and Solomon Islands. Neither are likely to be approved this time around, but the discussions are still worth watching.

“Look at it as a test point to see what kind of measures stand a chance, in current circumstances, to be taken forward,” said Faig Abbasov, program director for shipping at Transport and Environment, a nongovernmental organization. “Every single word that will come out of the mouths of the country representatives will be valuable.”

Previously approved rules on carbon intensity reduction relating to how ships are designed and operated, known as short-term measures, are also set to be formally adopted at the talks. Wrangling over key details has recently taken place, with the U.S. among those pushing for a stronger reduction, Abbasov said.

But however bullish the U.S. is on short-term measures, the success of its agenda ultimately rests on weaning the global shipping industry — which delivers about 80% of world trade — off oil-based fuels. For that to succeed, governments around the world may have to get behind a global carbon tax. That could be a tricky conundrum for a U.S. administration that has yet to fully embrace that idea domestically.

Although the U.S. only has one vote at the IMO, its new stance “ratchets up pressure,” on the organization, said Edmund Hughes, a former official at the UN regulator who was responsible for greenhouse gas emissions.

“It gives a very clear signal to business about investment, and that’s critical,” he said.

This article was originally posted on Transport Topics.