15 Unexpected Things To Do Near The Shard & London Bridge 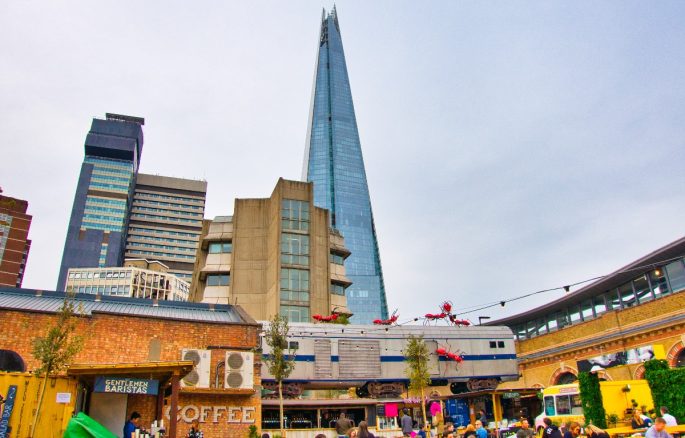 One of the reasons London is such an endlessly exciting city is because it is forever evolving. And along with other parts of the English capital, the London Bridge area of the city is changing at a pretty fast pace. As a native Londoner I still remember the area around London Bridge before The Shard revolutionized the scene, and I can promise you this part of town has has come a long way in recent years. I also remember the level of excitement I felt when The Shard was being built and when I got a glimpse of The Shard before it opened to the public back in 2013.

Fast forward to today and tourists head to London Bridge specifically to see Europe’s tallest building – but what do they do after they descend to ground level again? I’m constantly surprised by how much there is to see and do in the London Bridge and Southwark area – and how quickly new attractions are being added to the list, so I’ve compiled this 2019 guide to things to do near The Shard – from museums to shops, street food to beauty salons.

15 UNEXPECTED THINGS TO DO NEAR THE SHARD There’s enough going on in the shadows of The Shard building to keep you entertained for days, but join me as I explore London Bridge and find a host of great things to do near The Shard, none of which involve ascending Europe’s tallest building and almost all of which let you keep your feet planted firmly on the ground. GET PAMPERED TO PERFECTION
WHERE: O’SULLIVANS SALON Think a salon inside a station is just for an emergency stop? Think again. Reviews are stellar for O’Sullivans’ London Bridge branch, located inside the Shard Retail Arcade whit sits directly opposite the Shard entrance. I can see why when I try out the service first hand. I’m impressed by the friendly welcome, the relaxed atmosphere and the expert cut and blow dry provided by Marco. I leave also sporting a perfect gel manicure courtesy of Jamie which I can’t stop running through my bouncy new hair. Appointments are efficient so even after a pampering session I still have the whole day left to explore the area, but I do so looking my best.

The salon uses the best products on the market in my book: Kerastase for hair and CND for nails. So whether you want a total revamp or a quick refresh, this is the place to book into near The Shard.

When: Every Tuesday from 9-2 If you’re looking for a locally sourced lunch and are in the area around The Shard on a Tuesday you can’t go wrong with London Bridge farmers market, which takes place in the stunning and historic surroundings of Guys Campus, King’s College. All the fayre is from within a 100 miles of the M25 and you can find producers of everything from homemade moussaka to artisan bread and cakes, and there’s plenty of space to sit down and enjoy your chosen goodies. The market is part of a larger network of London Farmers Markets across the city.

SAY IT WITH FLOWERS
WHERE: IGLOO FLOWERS A gorgeous selection of impeccably presented fresh blooms will make your day (or someone else’s)  – and are easy to pick up on your way to or from London Bridge station, as Igloo is located inside the Shard Arcade. This locally-owned business began life as a single florist shop in nearby Bermondsey Street before expanding to have branches in other London Bridge locations such as Borough Market. This 18th-century Chapel is quite literally within the shadow of the imposing Shard building, and opposite the all new Science Gallery, but it offers a contrasting perspective of London, with traditional stained and leaded glass rather than the more modern glass for which the neighbouring buildings are so celebrated. The church contains the tomb of Thomas Guy, and a marble sculpture to the hospital’s founder by John Bacon. Like most churches it is open to people of all faiths provided you are respectful, and holds a full program of Catholic masses and religious prayer services throughout the year. A very different kind of climb compared to The Shard here, as you ascend a narrow 52-step wooden spiral staircase to reach the church bell tower, which plays host to The Old Operating Theatre Museum.

The history of medicine and surgery pre-anaesthesia makes for a slightly gruesome subject, and as well as an exhibit stuffed with medical curiosities, the shop’s small collection of souvenirs fully reflect the theme.

There’s a quirky events programme including talks, and even horror movie nights, for those who want to immerse themselves in the location’s spooky syllabus.

HAVE A COFFEE WITH A CONSCIENCE
WERE: CHANGE PLEASE COFFEE VAN Imagine if buying yourself a coffee could change a life? The idea behind Change Please coffee vans is just that: the mobile coffee units are all staffed by previously homeless individuals who have received training and support to transform their lives by filling the ever-expanding gap for caffeine in Londoners’ lives. The concept is simple but powerful, and has pride of place in the London bridge area with 2 locations: one pitch opposite The Shard, and one at Borough Market.

RUMMAGE FOR VINTAGE
WHERE: VINEGAR YARD The newest addition to the London Bridge scene is all about the old rather than the new. Vinegar Yard is a destination for flea markets and retro finds, as well as art and street food, all served up with a startling view of The Shard.

But get down there soon, with the ever changing vista of London Bridge and the building boom it’s not guaranteed how long this all-day beer garden will be available on tap.

BE SCINTILLATED BY SCIENCE
WHERE: SCIENCE GALLERY LONDON This huge and impressive modern gallery space is completely free for anyone to explore, boasts a great cafe with views of the courtyard outside and has a design-led gift shop which is well worth a look.

Since signing up for Paperless Post I haven’t bought many cards, but I adore this one! Exhibitions are described as a collision of art and science, and include lots of interactive fun, and there are free tours too, plus a series of Friday Lates where you can explore after dark until 10pm. Peter Layton’s London Glassblowing Studio is one of the foremost studios in Europe for hand-made glass art and has been on Bermondsey Street for a decade.

The workshop and gallery is open to the public, so after you’ve admired The Shard itself, you can learn how glass on a much smaller scale can wow you even more. As well as the series of exhibitions and live demonstrations of this amazing artform, you can book for bespoke experience days and make your own piece of blown glass on site.

SHOP & SAVE THE CHILDREN
WHERE: MARY’S LIVING & GIVING SHOP In an area as trendy as Bermondsey Street even the charity shops have celebrity credentials and sell designer brands. Mary’s Living & Giving is an upmarket retail store which is the brainchild of UK retail guru Mary Portas.

The shop in spitting distance of The Shard is as packed with high end bargains as the other outlets in similarly swish parts of London, like Westbourne Grove and Primrose Hill. I pick up a near perfect condition Massimo Dutti handbag for £25 – and I leave with a new bag, a smile on my face, and the knowledge that my shopping habit might have actually helped someone. The Michelin-starred Cantonese and dim sum restaurants are famous in Hong Kong, but this London Bridge branch is the first in the UK. The interior of the early 13th century St Thomas Church has been transformed by the designer behind Soho Farmhouse to make a temple to delectable Dim Sum. If you’re in town on a Sunday try taking on the bottomless brunch – with or without the free flowing Perrier Jouët champagne.

DO SOME SHIP SHAPE SHOPPING
WHERE: HAY’S GALLERIA

When: Opening hours of shops and restaurants vary Once known as Hay’s Wharf, this was the key landing and storage point for much of the dry goods, including tea, imported into London by ship. As such it earned the nickname ‘the larder of London’. Today the beautifully restored Grade II listed building is home to a smattering of shops and restaurants and a huge bronze ship sculpture called The Navigators. The Galleria is also a great access point to one of London Bridge’s other important viewpoints aside from The Shard: The River Thames. From the rear of the Galleria you get panoramic views of the water and of Tower Bridge.

SEE A SPLASH OF COLOUR
WHERE: THE FASHION & TEXTILE MUSEUM There’s a surprising number of museums within walking distance of London Bridge Station, but this fashion museum which was founded by British designer Zandra Rhodes in 2003, is a lot more colourful than its counterparts,.

Alongside London fashion focused exhibitions there are talks, tours and events to enjoy for visiting fashion fans. Whether you’re a tourist in London or a local it’s always fun to stumble on a commemorative blue plaque celebrating the history of the area. There are relatively few in the London Bridge area but you are bound to see a special Guy’s and St. Thomas’ blue plaque if you spend the day here – it shows the location John Keats lived at in the early 1800’s.

SAVE THE BEST FOR LAST
WHERE: BOROUGH MARKET You simply cannot come to London Bridge without having a meander around Borough Market – everything from oysters to Ethiopian food is available in one of London’s most iconic outdoor produce markets.

In fact even if you don’t consider yourself a foodie the atmosphere and history will inspire you and help you get the most out of your day exploring the London Bridge area.